Inclusion: A Critical Element for Workforce in Construction and Design 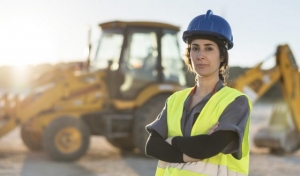 A skilled workforce is an indispensable element of successful design and construction in the United States. Projects begin with the designs and calculations of licensed architects and engineers of various disciplines, and rely on the work of dozens of skilled trades to bring the project from plan to reality.

For several years now, the U.S. market has been reporting challenges with a lack of skilled workers to meet demands. Thousands of architects and engineers who lost jobs during the recession did not come back to the field when the economy rebounded. As recently as July–August 2019, the Associated General Contractors of America concluded a study showing that over 80 percent of U.S. contractors—regardless of company size—report having trouble finding skilled workers.

Any solution will take time, due to the time required for worker education and training (aka the pipeline). This workforce shortage can lead to pricing increases and slower production schedules.

INCLUSION OF ALL EMPLOYEES

One step construction and design can take to improve their workforce now is to improve the inclusion of all employees—diverse persons as well as members of the majority—on a worksite. Diversity has been an ever-growing topic for employers over the last 10 years, but why now discuss “inclusion?” Because inclusion relates to respect for all, despite their differences. Because creating a healthy company culture creates a safe company culture. Because the same old way of doing things may not work with different market participants under changing circumstances.

And perhaps most importantly, because a focus on diversity, alone, has not been enough to help the workforce. A company’s focus solely on diversity can easily turn into a numbers game—a mindset based on quotas and tokenism. Yes, diversity efforts have led to more women and minorities in the workplace overall. But many of them are harassed, bullied, discriminated against, and ill-treated.

In fact, in construction specifically, Bureau of Labor Statistics shows that, while the percentage of female workers has grown, the overall underrepresentation of women in construction is the result of discriminatory practices—like sexual harassment, hostility, lack of mentors, and stereotyped assumptions about women’s capabilities—that lead to their departure from the field. In addition to skilled labor, the owners/managers of M/W/DBEs, often face similar issues of discrimination, harassment, and maltreatment by general contractors or other trades.

That discrimination is illegal under federal and state laws. Title VII of the Civil Rights Act of 1964, as interpreted by the courts and the federal Equal Employment Opportunity Commission, prohibits discrimination (including harassment) based on a person’s race, color, national origin, sex, pregnancy, religion, age, disability, genetic information, and prohibits harassment based on sexual orientation and gender identity. Title VII applies to any private sector employer with at least 15 employees, as well as state and local government employers. In addition to the federal law, applicable state and local laws may explicitly prohibit employment discrimination based on sexual orientation or gender identity.

In sum, the U.S. has, simultaneously, a workforce shortage AND skilled workers leaving the field due to discriminatory treatment. Thus, the need for genuine work from construction company leadership on efforts toward inclusion—to create a safe environment, free from discrimination and harassment, for all workers on a construction site. This step would allow all workers, including the minority workers (women, ethnic/racial minority persons, LGBTQ persons), to do their work in peace and safety. And that will bolster the retention of employees, and positively affect available workforce.

Inclusion is also important because these current intercultural dynamics are not going away. To the contrary, the diversity of our population and workforce will only increase in the coming generation. The U.S. Census Bureau anticipates that, by 2045, the U.S. will have a “minority majority”—Caucasian people will comprise 49.7 percent of the population; the majority will be comprised of 24.6 percent Hispanic people, 13.1 percent Black people, 7.9 percent Asian people, and 3.8 percent multiracial populations.

Similarly, the age of the workforce is changing. At present, Baby Boomers account for the majority of the workforce and Millennials only one-third. Those figures are anticipated to reverse in the next 25 years. And the workforce has more openly gay, lesbian, bi-sexual, and transgender workers than ever before.

This significant change in U.S. population and workforce in the next 20 years compels companies now to improve efforts toward inclusion – to promote respect, understanding, and acceptance of one another in the workplace; to end discrimination; to put anti-harassment policies in place and enforce them; to foster healthy and safe work environments for all employees.

One excellent example of these efforts is a collaborated effort between the Ironworkers (IW) and the Ironworker Management Progressive Action Cooperative Trust (IMPACT) to improve site safety through the “Be that One Guy” Program. Ironworker Vicki O’Leary founded this program in response to a tragic death of a female ironworker, killed by a male harasser on a worksite. This program teaches ironworkers on site to be “upstanders” who can intercede and turn around a bad situation. O’Leary, now the international union’s general organizer for safety and diversity, speaks and teaches nationally on the connection between respectful work environment and site safety. Her message and training program have now expanded beyond the Ironworkers to trades nationally.

As a construction or design company takes steps to improve its culture and its workforce, inclusion is the necessary element for respect and involvement of all members of the group. Without inclusion, a company may employ diverse persons, but they may not be empowered. They may have jobs, but they have no voice. By contrast, through active steps of inclusion, a company demonstrates that it values the contributions and safety of all members. Those steps will keep more skilled workers on the job and improve the state of the workforce overall. Inclusion is a critical element for workforce in construction and design—and it begins with each one of us. #inclusionstartswithi

Kristine A. Kubes, kristine@kubeslaw.com, is a construction attorney and principal of the Kubes Law Office, PLLC, Serving Design and Construction Professionals. A frequent educator and advisor on ethical practice, licensing, and risk management for the design/construction markets, Kristine is currently the national Chair of the American Bar Association Forum on Construction Law. Follow Kristine on Twitter @kakubes. This article does not constitute legal advice. Each case must be evaluated on its own facts.

Congratulations to Mark Cooper from @StateofMN Dept of Administration PTAC for the @AWCofMN service award! Thank you for your advocacy for AWC & its members!